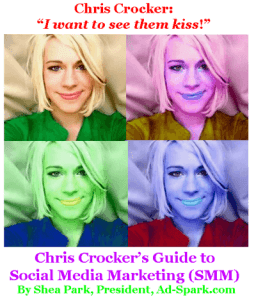 According to Wikipedia, Chris Crocker is an American Internet celebrity and self-described “edutainer.” His work consists mainly of short-form self-directed “monologues about life” shot in his grandparents’ home.

If he was a Madison Avenue marketer (which is debatable one way or the other), he would probably have a buzzword-filled quote that would make all the trades while he sat on a panel at one of the dozens of social media conferences there are today.

At last count Crocker’s videos have received around 50 million plays on MySpace, and his vlog channel on YouTube is the 18th most viewed of all time in all categories, with about 160 million views. However, there are those who continue to ask when his 15 minutes are over?

Some keep thinking that social media marketing’s 15 minutes are almost over. There are plenty of far left and right wing opinions flying at the moment. Some archaic viewpoints foretell social media as a fad that will soon wane. However, ignoring the omnipotent impact that Social Media has on the internet over the last 4 years is comparable to bailing water from a sinking boat and telling one rescue boat you’ll wait for a bigger one. At least for now, Social Media is effective and here to stay. If you have not built or are not personally or professionally getting social, writing a blog, or learning about mobile, you may as well let the rescue boats pass by and continue bailing water.